How I manage my blog

I started the blog this summer, and it was a completely different thing at the beginning. I was using Jekyll to build it and Github Pages to host it, but then I bought a domain name and I wanted to try out Firebase.

It was working great but there was no learning pretty much as this is just a small static website with no advanced functionalities.

After writing a post, I just ran jekyll build to generate the HTML and firebase deploy to deploy the generated HTML to Firebase. Some time later I moved to Hugo, but the workflow was pretty much the same.

The thing is that I like building stuff and always learn something new. So I started using a VPS from Digital Ocean and I followed this really clear and easy tutorial to setup SSL with Let's Encrypt on nginx.

How it works now

Since I use git to version control my website, I wanted to take advantage of that, so this is my current workflow:

If you already have your website on version control, you can skip to the next section.

After creating a repository on Github, let's create the website structure, make it a repository and add the remote:

Let's add the files to the repository:

You can configure Hugo pretty much however you want, choosing your theme, website name and a whole lot of stuff, the official documentation is a nice place to start.

Now we have to setup the Github Action that will automatically generate the HTML after every push and put it in another branch, in this example it will be called public.

Github Actions can be created from the web interface, but all it does is create a file in .github/workflows called main.yml.

So let's create it with our favorite editor and write the following code:

We will need a pair of ssh keys to allow Actions to push to a new repository, so after generating them with ssh-keygen, let's add the public key as a deploy key, you can name it whatever you want: 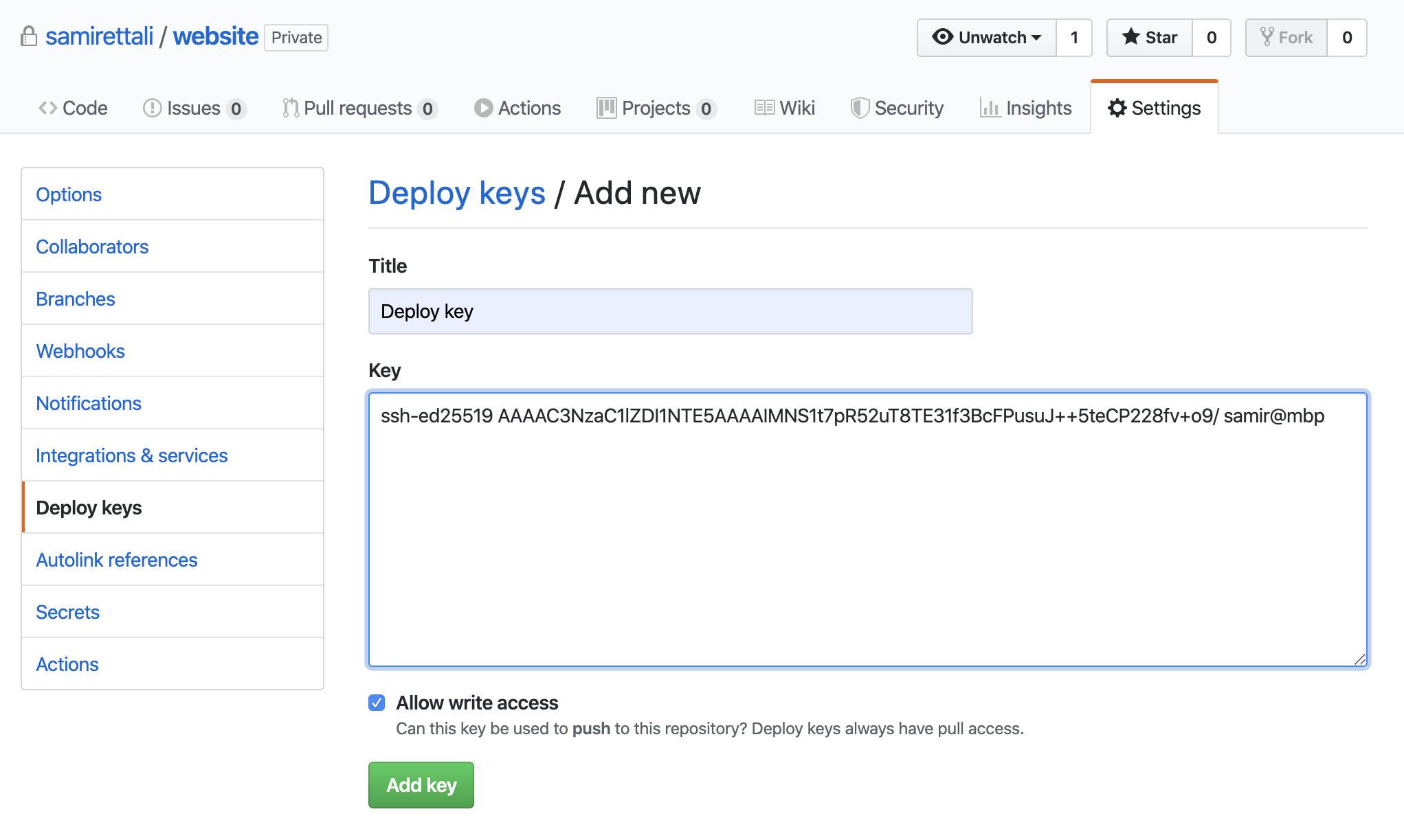 And then, let's add the private key as a secret called ACTIONS_DEPLOY_KEY: 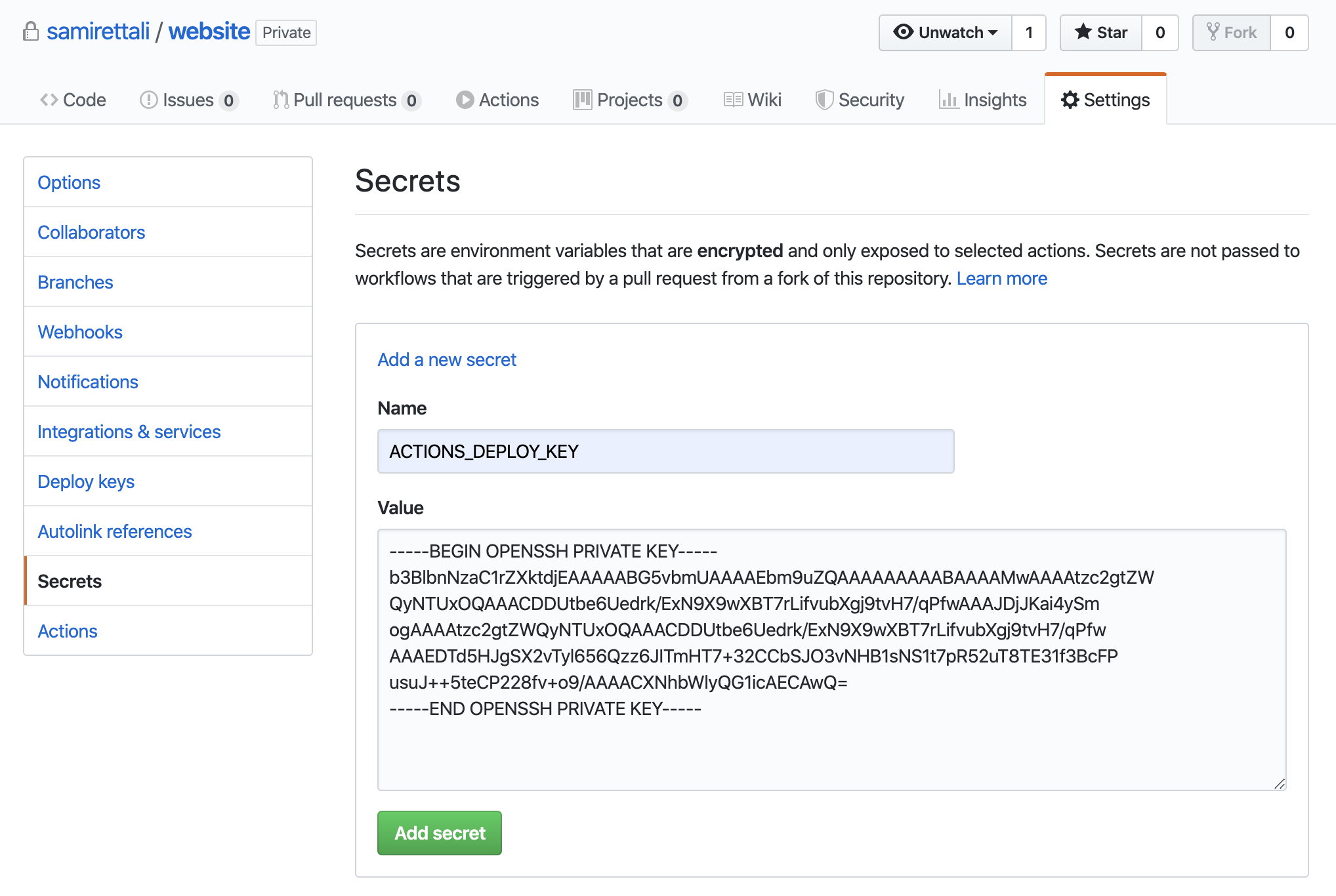 Now Github Actions should be able to build from master to public and our repository should be ready to go!

P.S. these are not my actual keys, it's just a test repository that I removed.

The last thing to do is to setup our server to automatically pull from public. We will use a bare repository, which basically have the .git folder separated from the working tree, which will contain the files of the repository.

After copying the previously generated keys to our server, let's add it to the ~/.ssh/config file, so that git will use it:

I like to use a different key for every project that is not on my personal computer, so that, for example, if I lose a key or it gets compromised, I only have to change that one.

Now we have to set up a bare local repository and tell it where to pull from:

Note that the current user must have permissions to write in /var/www/html, and you can of course use your web server directory instead of /var/www/html, which is mine.

Now we need to tell git to use the files in the public branch:

And now we can setup cron to periodically pull from Github. After running crontab -e let's add this line:

Now cron will pull every 15 minutes from Github, and it will log any error in a file called website-errors.log in the user home. You can use crontab.guru to generate the job that you want.

From now on, after every push, Github Actions will log in the Action tab the operation success:

If it fails we will receive a mail and of course the public branch will not be modified and we can inspect the Actions tab on Github to find what's wrong.

This setup can be easily adapted to work with Jekyll or other static website builders, of course there are many other better ways, but this is the one that fits my needs the most. It can become really powerful if, for example, you want to plan posts publishing by using publishDate option in Hugo and set the Github Action to build your site every hour.

I hope this will be useful for someone, don't hesitate to contact me for clarifications, thanks for reading!